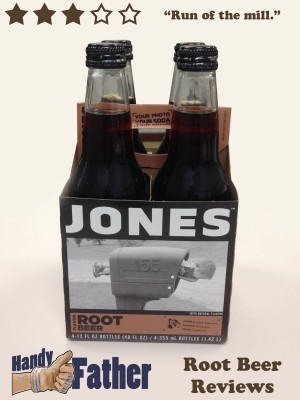 This Jones Root Beer Review was done by the five Handy Father root beer connoisseurs. We had high hopes for Jones Root Beer.  It has a nice, dark color.  It also has a thick and creamy head when poured into a frosted mug.  Jones root beer has inverted cane sugar in it, so it is unique in that aspect, as we have never had another root beer with this sweetener.

Jones Root Beer really is a run of the mill root beer.  There are hints of flavors, but is seems as though the Jones people couldn’t decide what way to go with it, so they just added a bit of every ingredient they could think of, and call it a day.  It doesn’t have any particular stand-out flavors.  It is sweet, and slightly creamy, with an aftertaste that is difficult to pin down.  There are too many flavors competing, and none of them special.

We gave the Jones Root Beer Review a score of 3 stars out of 5 for its middle of the road approach to root beer.

Since 1996, the Jones family has been making sodas under the name of Jones Soda Co. Seattle, WA.  They do however make their Root Beer in Canada.

Altogether, this is an unremarkable root beer, but if it is the only option, a drinkable one. Don’t get your hopes too high though, or you’re in for a let down.

Have you tried it? Leave your Jones Root Beer review in the comments below or tweet @HandyFather.