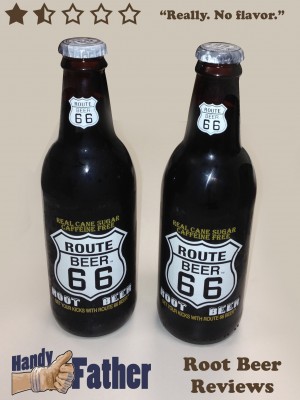 I had trouble calling this soda a root beer, and luckily for this Root 66 Beer Root Beer Review, the problem is solved for me. “Get your kicks with Route 66 Beer™” is right on the front of the bottle. The Route 66 Beer is not root beer.  It may be brown, it may smell vaguely of root beer, but that is where the similarities end.

Route 66 Beer has a mediocre head that doesn’t last long, but isn’t terrible.  It has a nice, dark amber color.  The flavor is missing.  If not for the dark color and slight smell, you could mistake this root beer for a club soda or tonic water.  The flavor was so dissapointing that when we were reviewing this root beer, I nearly poured some down the drain because I didn’t want any more of this revolting beverage.

We gave the Route 66 Beer root beer review a score of 1.5 out of 5 because of the lack of root beer flavor.

This really is a sub-standard root beer. The best part of this soda is the dark brown bottle with the iconic Route 66 logo on the front.

It is bottled by authority of Route 66 sodas, LLC. in Lebanon, MO.

, click now to buy it, and try it.  Let us know in the comments what you think of Route 66 Beer, or tweet @HandyFather hashtag #rootbeerreview.