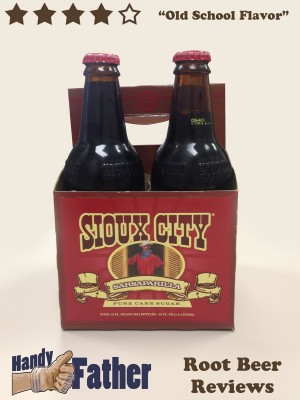 is a mildly flavored, creamy and old school-tasting beverage.  It hints at amazing with its gentle bite, decent carbonation, and is not over sweetened. The predominant flavor apart from the creaminess is sassafras. It is sweetened with cane sugar.

Sioux City Sarsaparilla isn’t technically root beer, but is more like the predecessor of root beer. The Sioux City brand also makes a soda called root beer, so it will be interesting to see how it measures up against the sarsaparilla.

Sioux City Sarsaparilla comes in amber bottles decorated with saloon-style fonts and with a cowboy entering a saloon.  It is a fun look with an old west theme.

We gave the Sioux City Sarsaparilla Root Beer Review a score of 4.0 out of 5 stars.

It is distributed by White Rock Products Corp. Whitestone, NY.

“It is sweet and creamy, but the little bit of minty/spicy flavor it has balances it and keeps from being too sweet. It almost has a little bit of a fermented aftertaste, but in a good way.”

Quote from one of our Handy Father Reviewers.

Have you enjoyed a bottle of Sioux City Sarsaparilla?  If not, you can pick one up here

.  We found ours at the local Martin’s supermarket.  Give it a try, and then comment on what you thought, or tweet @HandyFather.