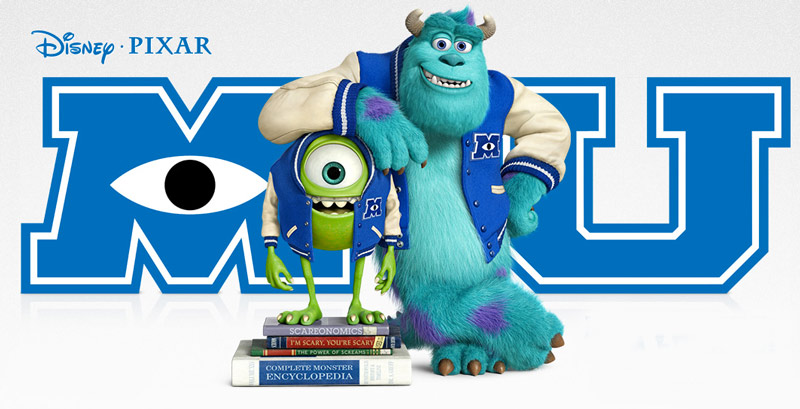 We brought our kids to see the second installment from the Monsters Inc. movie series, Monsters University.

The movie chronicles the life and childhood of Mike Wazowski, a small, green and bulbous one-eyed monster.  His life goal was discovered during a field trip to the monster power plant.  Mike gains access to a child’s bedroom where a “scarer” monster is about to collect scream from an unsuspecting child.  Screams harvested are used to power the fictitious monster world.  This was of course very dangerous for young Mike as coming into contact with humans and their possessions is lethally toxic to monsters.  The “scarer” finds Mike had been in the room and is impressed with him, leaving Mike with his own scarer hat from Monster’s Inc.


From that point on, Mike Wazowski’s entire life leads him on a path to attend the greatest university in the monster world, Monsters University.

During the initial days of being a “scarer major” at Monster University, Mike Wazowski meets his life-long friend, Sulley, a large blue monster with pink spots and horns.  They find each other as competition to be the top scarer in the class.  Mike is a hard-working book-reading type, and Sulley rides his famous father’s name and natural scaring ability.

Through the course of their competition with each other, they wind up going overboard and getting kicked out of the scarer program.  The dean of students offers them a chance back into the program, but only if they win the “Scare Games”.

The Scare Games, founded by the dean of students, pits teams of 6 monsters against one another in a series of games meant to test the skills required to be a great scarer.

Mike and Sulley team up with four misfit monsters in the fraternity of Oozma Kappa to join in the hunger games, and ultimately giving them a chance to get back into the scare program of Monster University.

To know what happens in this prequel of the hit Pixar Animation Monsters Inc., I suggest you take your kids out to your local theater and enjoy the show! Send a child you know to the movies with an AMC Gift Card

I’d give this movie a 4 out of 5 monsters for a kid-friendly activity.

My three year old daughter did find a few scenes to be a bit scary.  She did say afterward that liked the movie.