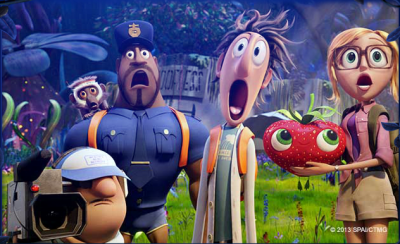 At the end of Cloudy with a Chance of Meatballs 1, Inventor Flint Lockwood thought he saved the world when he destroyed his out-of-control invention, the FLDSMDFR (Flint Lockwood Diatonic Super Mutating Dynamic Food Replicator) — a machine that turned water into food causing cheeseburger rain and spaghetti tornadoes. But the viewers soon learn that Flint’s invention survived and is now creating food-animals like crunchy tacodile supremes, shrimpanzees, watermelophants, cheespiders and other food-animals to save the world and swallow falls again!

In the second installment Flint joins up with his friends and his childhood idol, and inventor, Chester V (Will Forte) journey up the big rock candy mountain to find the FLDSMDFR, to shut it down and save the world from mutant food.

This movie was very entertaining, and my 3, 6, and 10 year olds were glued to their seats for the duration.  The movie picked up exactly where the first installment left off, an immediately the plot thickens as the villain shows up in the opening scene to usher the inhabitants of swallow falls off the island community under the guise of their own safety while he tries to complete his nefarious plan.

This is an action-packed adventure that all ages can enjoy.  There were a few instances of adult-themed humor, that young kids won’t pick up on, and could have been left out of the movie. Case in point, the “BS” USB device.

Apart from those few adult things sprinkled into the movie, it was very enjoyable, and worth the watch if you’re looking for something to do with the kids.  It is available in 3D as well as 2D.  We watched the 2D because my youngest doesn’t keep the glasses on, and the few extra bucks doesn’t seem worth it.

Overall I give my Cloudy with a Chance of Meatballs 2 review a score of 7 out of 10 for kid-friendly entertainment.

Handy Fathers all around would do well to take their kids to see Cloudy with a Chance of Meatballs 2.

Do you have you own Cloudy with a Chance of Meatballs 2 review? Leave a comment below or tweet @HandyFather.