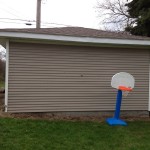 The need for a garage side door became evident upon moving into our new home.  We have a small, one car garage.  It functions as a shop and a shed for this Handy Father.  With a large metal Garage Door,

on one side, I was the only one able to enter easily.

I knew that I wanted a side door for the garage, so the kids could use it to get their toys and bikes.  Also, my wife prefers not to open the large door.

How to frame a garage side door

The first thing I did was select the location for where I wanted the door, and made mental plans for the garage side door installation.

Searching craigslist, I was able to locate several doors that would have worked.  I didn’t want to spend much, and had a set of criterion that I just wasn’t finding.  The solution to my need for a garage side door happened while I was talking of the project with my friend, Scott, who is the founder of Selling Songs, a site for people who want to sell their songs.  He said that he had a couple of exterior doors taken from an old lake house before it was remodeled.

The price was right, and the door is nice!  A Solid wood door with several glass panes make my garage side door, the best part of the structure.

I took measurements of the door and laid out a plan for installing it.  I chose a section of the garage with three studs, and removed the center stud.  Then I framed in the doorway.

Since this was to be a garage side door, I didn’t bother with a standard door framing.  I used double studs on the sides, making sure they were 1/8″ wider than my door itself, and level. Once framed, I drilled holes through the siding from the inside, and marked the location of the door on the siding.  I used my circular saw from the outside and cut through the vinyl siding and old wood siding on my marks.

The door came with a handle on it already, but I didn’t have a key. I purchased an exterior door handle and had it keyed to match my existing house keys.  This way I don’t have to add to my key ring.  It installed easily on the door.  I had to remove material from the latch side of the doorway to allow for the door to latch shut.  I marked where the latch plate should go, eying the latch itself, and used a 1″ spade drill bit to make the hole.  I attached the plate with the screws provided.

once the door shut and latched, I added some 1×3″ strips of wood on the outside of the door with hardwood trim nails.  This serves as a stopper for the door.  It also eliminates light coming through the cracks.

I cut the vinyl siding around the exterior back enough to add some 1×4″ trim.  The is old and brittle, so I had to painstakingly cut it with a Stanley Knife to keep a straight edge.

The last thing I did was remove the door, and paint the frame white to match the garage trim. 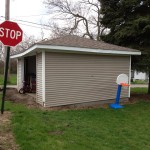 Before the garage side door project 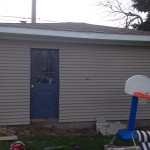 During the garage side door installation 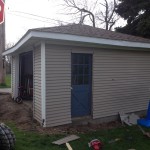 3/4 view of the garage door framing and installation 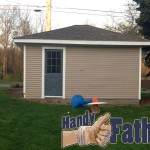 After the DIY garage side door framing and installation