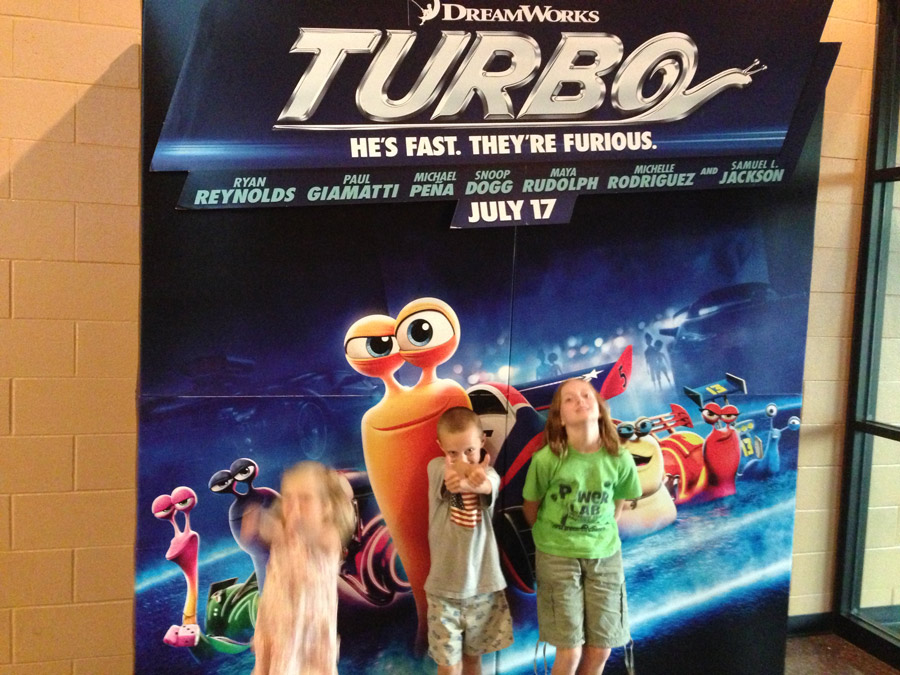 Turbo (played by Ryan Reynolds) is a snail who dreams about going fast.  His brother Chet (played by Paul Giamatti) and all of the other snails embrace the snail’s pace, and so Turbo is an outcast.

Turbo finds himself sucked into the intake on a muscle car after watching traffic from an overpass.  He is changed on the molecular level after inside the muscle car’s engine, nitrous oxide is used, and courses through his little body.  This enables Turbo to go from snail’s pace to an excess of 200 miles per hour.

Not long after Turbo gets this amazing ability, Tito (played my Michael Peña), a California-based taco truck driver, picks up Turbo to enter him into some snail races.

Turbo, with new found friends work together to overcome adversity, and bring glory to the Starlight Plaza.

I always enjoy watching what DreamWorks has to offer.  Turbo didn’t disappoint! Turbo was interesting enough to keep me watching, and had enough going on to keep the kids entertained.

It is well deserving of the “G” rating and kids of all ages as well as adult will love this high-speed animated movie.

The storyline was well executed in that you feel for Turbo, and it is easy to root for him all the way to the finish line.

The supporting cast of characters are very funny and bring friendship to the otherwise outcast snail.

There was a surprising amount of perceived death in the movie with a few snails getting carried off by crows, as well as the death of a crow.  It is done well, and is funny, but is also worth noting.

I would recommend this movie for a family movie night, and will certainly put it into the kid’s movie library when it is released.

Do you have a Turbo Movie Review?  Leave it in the comments below.