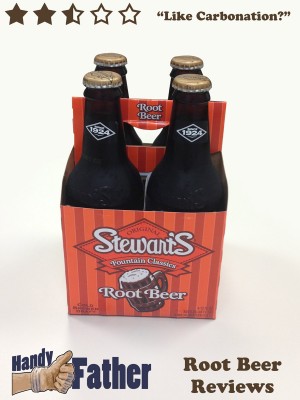 The root beer flavor is good with a sweet molasses and vanilla taste to it.  The problem is that it is so heavily carbonated that it’s hard to taste what is going on.

Stewart’s root beer is light in color, and light on taste.

This is a mediocre root beer, although drinkable.  We rated it a 2.5 out of 5 stars.  Stewart’s Root Beer

leaves must to be desired, but it’s not as bad as it could be.  It is similar to A&W or any of the other “big brand” root beers.

Stewart’s root beer since 1924 – “In 1924, an Ohio schoolteacher named Frank Stewart set out to develop the world’s best tasting root beer. With secret recipes and tall frosty mugs in hand, he soon opened his first Stewart’s roadside stand. Nowadays, you can still enjoy the creamy taste of an ice-cold Stewart’s Root Beer – served up in a classic bottle with a crown cap. Because when we make a soda, we still follow the same time-tested principles that Frank did – brewing the authentic recipes only in small batches. After all these years, the flavor still takes you back. Pop open a Stewart’s and it’s “then” all over again!”

This Stewart’s Root Beer Review was conducted by three handy fathers with a passion for a good root beer.  Additional tasting by a handy mother who gets offended if we don’t include her in the acknowledgements.

Know what root beer we should review next?  Have a Stewart’s root beer review of your own?  link to it in the comments below, or share it with us at facebook.com/handyfather.