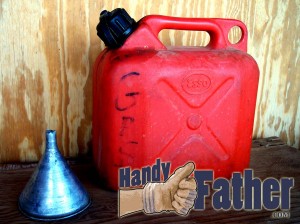 Handy Father tip: Keep a few gallons of gas on hand. You never know when someone will be running on empty, and need your help.

Running on empty isn’t something a handy father wants to do in relation to his vehicles.

Last night at 1:30am a Handy Father reader got a call from his daughter.  She was on her way home from a town about an hour away.  She was lost.  She was nearly out of gas.

First things first, he had her drive to the next intersection and let him know where she was at.  It turns out that she was 25 miles north of her intended destination.

The good news.  She was running on empty, only a couple miles from a main road and a gas station.  She told him that she’d get some gas. Problem solved, right?

Running on empty? Keep more than $1.63 in your bank account!

The bad news.  She was out at 1:30 am with $1.63 in her account.  She had some cash, but this is Northern Indiana.  Gas stations aren’t open for cash customers, but you can use a card. The money situation was not divulged to our Handy Father.  She did get gas, but at $1.63 worth, that was less than 1/2 gallon of fuel.

A few minutes later, our Handy Father gets another call from his daughter.

“Dad, I ran out of gas.” “How did this happen? Where are you at?” he asks. She proceeds to tell him of the money situation, then tries to explain where she is at. “Well you know where…” This is where her phone battery died.

Handy Father, by this time, is getting ready to go out and help her.  He always keeps 5 gallons of gas around. He put the Gas Can

in the car, and set out to find her.  Using an app on his iPhone, he put in her last known location and mapped the best ways home.  Making his best guess as to which way she’d go, he set out.

He got beyond the point where he though he’d pass her.  Then comes a call from his wife.

Apparently when she ran out of gas, at 1:50 in the morning, she started walking home.  She noticed a woman folding laundry in a farmhouse.  She walked up to a stranger’s house in the middle of the night, and asked them if she could buy $5.00 worth of gas.  The farmer and his wife helped her, and she made it home.  She didn’t call to say the problem was solved, but she did make it home safely.

Our Handy Father, his resolve running on empty, went home. He left the five gallon can of gas beside her car and went to bed.

Items to combat running on empty:

Tips from our Handy Father: