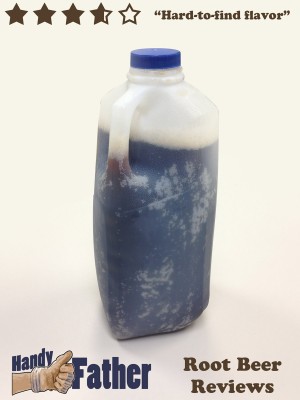 We purchased 1/2 gallon of the root beer stand Rochester root beer.  It is fairly dark in color, and had great head on location when it was first poured into the 1/2 gallon milk jug.  When we poured it into a frosted mug 30 minutes later, it was refrigerated, but as expected, less carbonated and with less head.  It has little smell, but has a good root beer flavor, sweet, but the flavor doesn’t linger.  Unlike many other HFCS root beers, it doesn’t seem to coat your throat with a sugary syrup.  It was a pleasant surprise!

The smooth flavor is easy to drink.

We give the Rochester Root Beer Review a 3.75 out of 5 stars for its subtle flavor and overall drinkability.

The Rochester Root Beer is distributed by ConAgra Foods, and is marketed under the brand of J. Hungerford Smith.

“Our Root Beer Fountain & Shake Syrup is the original syrup that founded the syrup industry. This product is specifically designed for high volume root beer operators seeking a from-scratch product promoting it as real root beer.”

You will be hard-pressed to find Rochester Root Beer anywhere except in root beer stand / drive in restaurants. For sure, you can get this tasty root beer at Shopoff’s Drive-In in Syracuse, Indiana.