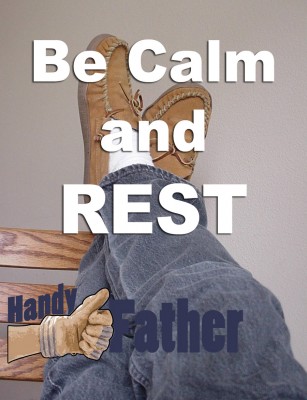 Be calm and rest. It is a Handy Father rule! Rest!

Yesterday day I spent time in rest, not working out, not exercising, not blogging! I believe this to be a valuable part of any workout regimen.  Rest one day in seven, taking a day to recoup and recharge.

I did walk about 2 miles, but I think that’s probably about a minimum distance I walk in every day steps.

Another thing I did was hit the local store for summer clearance.  I was able to pick up a spade shovel at a 70% discount, which was nice.  Previously I’ve only had a square-edged shovel which doesn’t always dig as well as a good spade.

As far as diet, I drank 4 12 oz glasses of water.  We had a nice sausage and broccoli with penne pasta stir-fry.  I had a Big Mac from McDonald’s for lunch, and no, I didn’t win a million dollar prize in the Monopoly game on the box.

Another thing that happened was that I got a trade offer in my Vintage Monopoly bigger and better project.  I don’t know if it will go through, but it’s exciting to know that people are still interested in the project.  Go ahead and click the link and check that out.

A day of rest

On your day of rest, do something you enjoy.  Don’t think about the following day, full of physical activity and projects.

There remains therefore a Sabbath rest for the people of God. For the one who has entered His rest has himself also rested from his works, as God did from His. Let us therefore be diligent to enter that rest, lest anyone fall through following the same example of disobedience.

Thank you for the read.

We will get some exercise next!