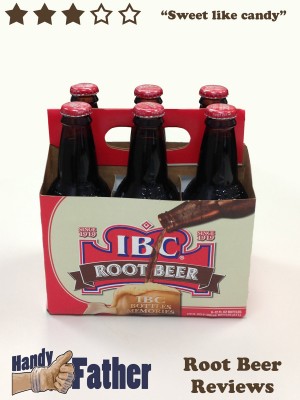 Today we did an IBC Root Beer

review. Five of use gave our impression of this creamy root beer.

The initial impression was that it had a sweet, creamy flavour almost like the flavour you get when drinking the liquid from a root beer float. Likened to the barrel root beer hard candies.  Maybe too much (HFCS) High Fructose Corn Syrup? The sweetness is not a good sweet, like honey, or natural sugars.

has a mild anise scent.

There is a fairly high level of carbonation which is expelled into the foamy head. The head on IBC root beer is pronounced when poured into a frosted mug, but it dissipates pretty quickly.

IBC root beer is pretty dark in color, but it is simply the fact that caramel coloring is the third ingredient behind carbonated water and high fructose corn syrup.

I don’t find anything special about this root beer.  It is drinkable, but not memorable as described on the packaging.

IBC is a registered trademark of Dr. Pepper/Seven Up, Inc.

is widely available wherever Dr. Pepper and/or Seven Up is available. You can also buy IBC Root Beer Here

IBC Root Beer is not the best.  It isn’t the worst.  That’s why we gave the IBC root beer review a 3 out of 5 stars.

Do you have a root beer that should be reviewed by this esteemed panel? Leave a reply in the comments section below. For faster and guaranteed review of your brew, contact us, or mail some to Handy Father: