I am a lover of Root Beer.  I’ve decided to sample as many different types of root beer as possible.

I purchased the Frostop Root Beer from Ace Hardware.

“We started making this super-creamy root beer way back in 1926. Soon its smooth old-fashioned flavor and long-lasting head became famous all across the heartland.  Try it in a frosted mug for a treat that can’t be beat.  Truly nothing tops it… but the foam!”

“Nothing tops it… but the foam!” couldn’t be farther from the truth!  Upon pouring the first glass of Frostop Root Beer into a cup, it seems way too dark with artificial caramel colorings.  It does have a pleasant vanilla smell, but it doesn’t translate to the flavor.

The initial flavor of the root beer leaves much to be desired.  It lacks the body in root beer that is present when natural honey is used.  The label says Sugar and/or corn sweeteners.  It is obvious that they have used corn syrup, and not real cane sugar as I’ve seen on other reviews of this root beer. 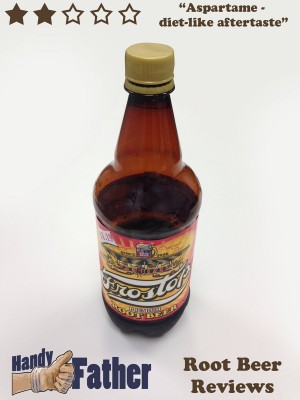 The Frostop Root Beer label touts this root beer as creamy and smooth.  Both are the case.  This root beer is fairly light on carbonation, and has a great head that lasts.

Frostop root beer has a weird almost aspartame-like aftertaste, like a diet soda.  I really didn’t enjoy it, but it wasn’t so bad that so as to be called undrinkable.

In all, I wouldn’t put the Frostop root beer on my list to buy again any time soon.

It is distributed under the authority of trademark owner: Frostop® Beverages, Inc. of Columbus, OH.