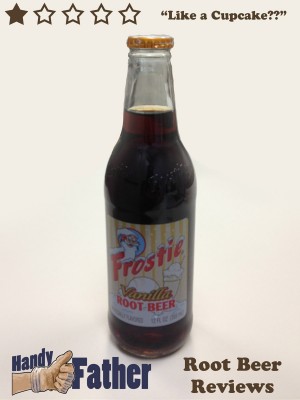 Frostie Vanilla Root Beer Review by Handy Father.  In no way does this taste or smell like root beer.  If you were planning on reading about a delicious variation of the beloved classic soda we know as root beer, you’ve come to the wrong place.

Frostie Vanilla root beer is artificially flavored and you can tell it from the first smell.  It comes in a clear glass bottle because there is nothing inside worth protecting with colored glass.

The only part of this Frostie vanilla root beer review that told us we were drinking root beer was that it was brown in color, and when you pour it, it has pretty good head.  It does not taste or smell like root beer at all.

The flavor of Frostie Vanilla Root Beer is very sweet, one reviewer said, “It tastes like a cupcake.”

Their actual slogan, not on the bottle, is “So creamy you might just float away!”

We give the Frostie Vanilla Root Beer Review a score of 1 out of 5 stars because this is not root beer.  It may say so on the label, but labels can be deceiving.

If you want to brave trying this soda to do a Frostie Vanilla Root Beer review of your own, you can purchase some at this link: Frostie VANILLA ROOT BEER

.  Be warned!  If you want to drink root beer, don’t drink this!