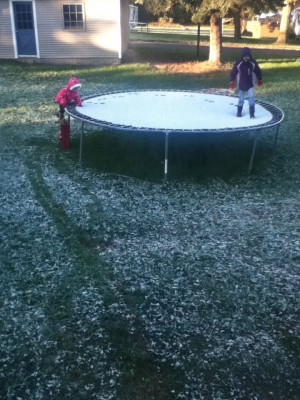 Early Snow – This year we have seen some unseasonably chilly weather.  Late October snow is fairly uncommon even here in Indiana, but it isn’t unheard of.  There is no reason that kids can’t go out and play in this early snow.

It was an opportune time, being Fall Break at school, so when we got a little early snowfall over the long weekend, this Handy Father’s kids were out on the trampoline having a marvelous time.

The temperature was only about 32ºF, but it was just cold enough that the snow didn’t melt for a good few hours in the morning.

It was exciting to see the kids having fun on the trampoline in the snow because this isn’t usually possible since we put the trampoline away in the winter.  I usually disassemble the trampoline just after Thanksgiving.

I thought I’d take this opportunity to list a few things to look forward to and play with with early snow, and throughout the cold months: