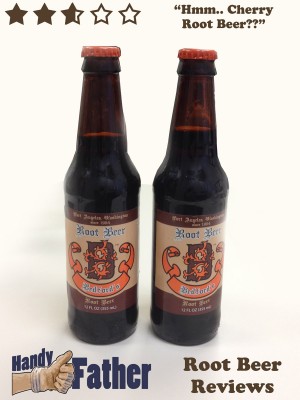 Bedford’s root beer review by Handy Father. A sweet root beer with dark color. It has a quickly rising and quickly dissipating head with small bubbles that become large as they dissipate.

Bedford’s root beer is a pure cane sugar root beer that acts a little like an un-naturally flavored soda.  There is a bit of aftertaste to this one.  The smell is not overwhelming and upon drinking it, you get a slight fruity, almost cherry tinge in your mouth.

Bedford’s root beer is not a terrible flavor, but doesn’t scream root beer to us either.  As a matter of fact, in a blind taste test, the consensus is that we would guess cherry cola before root beer.

There is a unique flavor to the Bedford’s root beer.

Overall this is a drinkable soda, but given the choice, we would probably not choose this root beer above an other.

We at Handy Father give the Bedford’s Root Beer Review a score of 2.75 stars out of 5.

Bedford’s root beer has been made out of Port Angeles, Washington since 1984, and is bottled by Orca Beverage in Mukilteo, WA under the authority of NW Soda Works, Port Angeles, WA.