I was sitting in the theater prior to the beginning of The Amazing Spider-Man 2 and for a moment I seemed to overhear another viewer complaining that I wore a Green Lantern hoodie to a Spider-Man movie. I wondered, did I just walk onto the set of the Big Bang Theory? Are superhero fans so petty? I would like to say that our collective admiration for the fantastic is what brings us together, not segregates. Am I mistaken? Is it wrong for a comic fan to wear a DC Comics shirt to a Marvel movie? Is wearing Green Lantern to Spider-man or Captain America to Man of Steel some kind of unwritten social taboo amongst the die-hard? Perhaps. Sound off your opinions in the comments section! 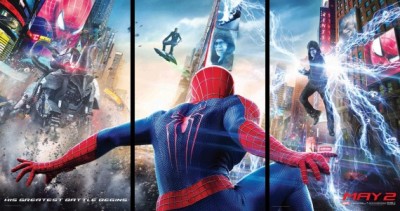 Before we dig into what makes the Amazing Spider-Man 2, well, amazing, I must point out I viewed the film in 3D. Normally I choose to avoid the unnecessary markup with live-action outings, saving the 3D prices for the better suited realm of animation. I decided to do some research beforehand and between the results and my timetable for today, the 3D showing was chosen. After my screening I can say confidently that the film is excellent in 3D. It is evident that Marc Webb wanted to utilize the medium so that viewers could experience the rush of web-swinging as the Wall Crawler himself.

Now for the main course. Just how does The Amazing Spider-Man 2 stack up to the swings, stings, and zings of its predecessor? Well, it is a mixed bag. The movie stars Andrew Garfield and Emma Stone, reprising their roles as Peter Parker and Gwen Stacy. It is clear that both actors have discovered what makes these characters tick. Garfield can play Spider-Man as well as the pages of the comic can portray him. As a child I was in love with Spidey as a hero. Some of my first comics were filled with the lovable Web Head and never would I have dreamed I would see him brought to life in such a magnificent way. From his burden of protecting those around him to the quips flowing from his masked mouth, Garfield understands the heart of what makes Spider-Man Spider-Man.
Emma Stone is sweet and lovable as Gwen Stacy, always looking both innocent and capable. The strength of her character lies in the confidence of her actions and the audience’s ability to see her through Peter’s eyes. Although most superheroes’ girlfriends are minor characters and damsel’s in distress, Gwen is not only a strong addition to Garfield’s Peter, but a necessary role in the film’s story. And for the majority of the movie their chemistry is good, but there are some moments that feel just a bit off, which often appears the case with actors who are actually dating off the set. The Gwen/Peter relationship could be considered the main plot to the movie, which worked overall and gave something a little more than the average action extravaganza.
Which brings us to the action. I believe the movie’s “Amazing” title is for the truly amazing spectacle audiences are treated to every time Spider-Man takes to the streets. Spidey’s first scene is truly delightful. We see as each web finds its mark building by building, time slowing to showcase everything that Spider-Man sees. As he swings into a police chase with the Russian mob, his spider sense triggers at each incoming danger, with the use of slow motion effectively highlighting the action bit by bit. In my opinion, seeing Spider-Man move and fight and doing whatever a spider can was the pinnacle of the viewing experience.

Which brings me to the downside. I would not say the plot is bad by any means. The movie run time is 142 minutes, nearly two and a half hours, which should be ample time for the outing. Yet there was something amiss. Perhaps there was just a bit too much time focusing on the relationship or Peter’s angst. And boy, there is a lot of angst to be found in this film. It could be if Webb focused a bit more on advancement and less on angst the movie’s villains could have been stronger. But a moment before I get to that. Peter and Gwen’s back and forth is understandable for plot purposes, but there are some moments where Peter tip toes on the border of lover and stalker, mapping out news on his father but filling the surrounding wall with pictures of Gwen. Maybe I missed her part but it seemed a bit overkill to me.

Now to the very bottom of the barrel: The Villains. Jamie Foxx plays Max Dillon who later becomes shockingly powerful Electro. Foxx’s acting is good as usual; the problem is the Dillon’s character. At first we are expected to feel sympathy for this walked-on nobody, but too quickly is he taken from quirky to creepy. He always feels just a bit lame and is motivated by paper thin bipolar disorder. Towards the end of the movie leading into the final confrontation with Spider-Man, he finally feels like a super villain, but still lacks the backing for the resonating character they appeared to be aiming for.

Dane DeHaan plays Harry Osborn, the childhood friend of Peter Parker. Not wanting to give too much away, he too switches allegiances and goes off the rails quite suddenly. It is almost as if the writers thought that if they made the mood swings and sudden feelings of betrayal the same between the two villains, they would not need to create any real background development for the two to connect. An angst filled youth and a nobody can make for good villains if handled properly, and though not terrible, these were not handled as well as would have been effective.

All in all I would say the movie is good. Not bad. Not great. The action amazes. The effects are enjoyable. The plot entertains. And the villains are okay enough to not sink the movie as a whole. As long as you go in for the right reasons, you will leave without regrets.